How to Visit the Chrysler Building

This post is a visitor's guide to the Chrysler Building.  We cover its history, how to get to it, and what there is to see.

While it's technically not possible to go up the Chrysler Building, as a tourist anyway, we have a secret tip on how to get a view of New York City from its top.

HOW TO GET TO THE CHRYSLER BUILDING

Be sure to check out our post comparing the different New York City observation decks, including the Empire State Building, Edge at Hudson Yards, Top of the Rock, or World Trade Center 1.

Entries to these observation decks are included from free from many of the New York tourist passes.

The Chrysler Building is located at 405 Lexington Ave in Midtown Manhattan adjacent to Grand Central Terminal.

You can also access the Chrysler Building via Times Square on the B, D, F, M, N, Q, R, and S - shuttle trains (Green Circle).

We recommend that you use this Google map to navigate your way to the Chrysler Building.

It's one of our top things to do in Midtown Manhattan.

Be sure to read out blog posts on navigating the New York City subway system and choosing which MetroCard to purchase.

TIP: We cover the outside of the Chrysler Building on our Midtown Manhattan, Manhattan Night and Grand Central Terminal Tours, not to mention on our GPS-enabled audio tours of Midtown.

Just about every tourist bus makes a stop at or around the corner of the Chrysler Building.

DOES THE CHRYSLER BUILDING HAVE AN OBSERVATION DECK?

In 2020, the Chrysler Building was given the go-ahead to open a public observation deck, though no exact date has been set.

You can read about the plans here.

There were observation decks in the past. When the building opened in 1930, there was an observation deck called Celestial on the 71st floor. You can see images of here.

Celestial was closed to the public in 1945 and is currently occupied by a private firm.

Until the late 1970s, there was also The Cloud Club, a private club occupying the 66th through 68th floors.

The developers of the new observation deck plan to redo the building’s 61st and 62nd floors, just above the famous eagle gargoyles.

The new observation deck will be the fifth skyscraper to offer stunning views of the city.

The other four are the Empire State Building, One World Trade Center, Top of the Rock, and Edge at Hudson Yards. Check out our post comparing these observation decks.

Entries to these observation decks are included for free from many of the New York tourist passes. Though there are no official tours run by the building, the spectacular Art Deco lobby should not be missed.

There are no tickets for the Chrysler Building. You may enter the lobby anytime the building is open, which is 8:00 am till 6 pm (18:00) on weekdays.

You can see the beautiful mural on the ceiling, the clock, and the beautiful elevators, each with their own custom-designed doors.

The lobby of the building is included in our Midtown Manhattan Tour, which is also available anytime on our audio tour app.

The Chrysler Building is quite centrally located in Midtown Manhattan, so it is close to many other attractions.

Here is a list of some of the nearby attractions:

The architect who designed this beautiful skyscraper was William Van Alen.

His design was sold to Walter P. Chrysler, who intended the completed building to be the home of the Chrysler Corporation.

With this in mind, the design was altered slightly to celebrate the aesthetic of Chrysler automobiles.

When the building opened to the public in 1931, the lobby housed a Chrysler dealership (see image). If you take a look up on the 31st floor, you will notice some interesting artistic elements.

On all four corners of this floor are silver winged ornaments. These designed as the cap of the God Mercury, the god of speed, an inspiration for Walter Chrysler.

These caps were used as radiator caps on Chrysler automobiles.

The motifs surrounding the winged caps are images of the 1929 Chrysler Speedster, including chrome hubcaps.

Replicas of eagle hoods ornaments (see banner image above) from a 1920’s Chrysler Plymouth can be found jutting off of the building like gargoyles, two at each corner.

The signature element though is the beautiful crown of the building, which features seven terraced arches radiating upwards, creating a shiny sunburst pattern, very typical of the Art Deco Movement.

The crown culminates with a 197 ft tall (60 meters) steel spire. The crown is clad in stainless steel (nickel) developed by the German Krupp company.

A Look Inside the Chrysler Building Spire

The year 1928 was an exciting time for architecture in New York City. Buildings were growing taller and taller and it was a race upwards to the sky with each new construction.

At the time that ground was broken for the Chrysler Building, it had one chief rival in the race to become the tallest building in the world: 40 Wall Street (the Trump Building). 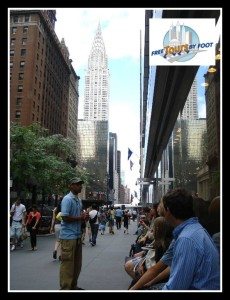 40 Wall Street altered their original design (840 ft) for a new height of 927 ft, thus beating the nearby Woolworth Building and the proposed height of the future Chrysler Building, 925ft.

When it was completed in May of 1930, the building proclaimed its victory as the new tallest building in the world.

They were unaware of the secret weapon that Van Alen was hiding in the crown of the Chrysler Building: the 125-foot stainless-steel spire that was going to grace the top of the building.

Four days after 40 Wall Street’s victory, the spire was raised.

It was in four pieces. The first was raised onto the roof and lowered into the building. The remaining sections were added in just 90 minutes.

That hour and a half were all that it took for the Chrysler Building to become the tallest man-made structure in the world, beating both 40 Wall Street and the Eiffel Tower.

Much debate ensued over whether or not the spire should count in the height since 40 Wall Street really had more useable floors.

The debates were halted eleven months later when a new contender entered the scene.

The Empire State Building was 1250 feet, far taller than the Chrysler Building, and with many more floors than 40 Wall Street.

The world had a new champion.

Van Alen was much acclaimed after the building was finished. His life quickly took a downward turn, however. He had failed to enter into an official contract with Chrysler when they began working together.

After the building was completed, Van Alen requested a fee. He wanted 6% of the building’s $14 million construction budget ($840,000).

This was the standard fee at the time. Chrysler refused payment, and van Alen ended up suing him to be paid. He won the suit, but his reputation was severely compromised.

That coupled with the onset of the Great Depression effectively ruined his career as an architect.

Stephen is the CEO of Free Tours by Foot and has overseen the transformation of a local walking tour company into a global tour community and traveler’s advice platform. He has personally led thousands of group tours in the US and Europe, and is an expert in trip planning and sightseeing, with a focus on budget travelers. Stephen has been published and featured in dozens of publications including The Wall Street Journal, BBC, Yahoo, Washington.org, and more.
Updated: October 3rd, 2021